Here at Velvet Pigmentation Clinic, we know that one of the most vital parts of a successful scalp micropigmentation treatment is selecting the best hairline style. Whilst it is possible to have some creativity and offer clients a ‘statement look’ for those who want to express a particular style or personality, we will mostly aim to deliver a highly realistic look when it comes to hairline styles.

When looking at style options for scalp micropigmentation, our main goal is to form the illusion of hair so that it appears to be as natural as possible. In order to achieve this goal, it is important to determine the best position, shape and design of your frontal hairline. Naturally drawn to straight lines, your hairline is the first thing that you and others see when looking at your facial area, acting as a frame to your face. You will find that a natural hairline has a curve to it, which we aim to adopt within our SMP treatment.

Read on to find out more about the position, shape and style of your hairline.

The best way to determine a natural hairline position is to compare your face and hair as it currently stands, with photographs from the past. Mimicking the position of your original hairline, after your scalp micropigmentation treatment, it will look as if you have turned back the years, restoring the appearance of your natural hairline. In some cases, men in their 40s or older may choose to opt for a more receded hairline, and on the other hand, if your hairline has been naturally high, you may want to bring your new hairline in a little lower. As experts in the field, we recommend you accept our guidance along with your personal preferences in order to get a look that appears the most natural.

Like the position of your hairline, the shape that you choose should replicate that of your original hairline shape. Any amendments to the shape should be minimal in order to best suit your face shape and not appear unusual. As mentioned, straight hairlines can appear dramatic and unnatural, so we would normally advise you to follow a rounded shape that works with the shape of your hair. Whether you would like to add widows’ peaks or a pointed centre, we will work with your ideas for your hairline shape to ensure they look as natural as possible.

In order to complete the look of your hairline, you may want to opt for a particular style of hairline, whether a broken or jagged hairline, a lightweight hairline or ‘edge-up’ hairline. A broken hairline involves scattering the pigment deposits below the real hairline to emulate the natural distribution of hair. As the hairline is rarely naturally defined, this is the most realistic option. Similarly, a jagged hairline removes all linear aspects, breaking up the hairline more aggressively.

Also known as faded, feathered or gradient hairlines, the lightweight hairline is applied to be extremely light, without any obvious boundary hairline. This look works best on those with lighter skin. The technique to perfect this look requires a lot of skill to achieve.

Finally, the ‘edge up’ or ‘hard line’ hairstyle stays true to the hairline position and may be more suitable for those with darker skin than those with lighter skin. These hairlines are the easiest to produce, but also the least natural, offering more of a ‘statement look’. 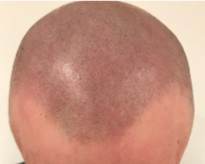 The broken or jagged hairline

A broken hairline requires the scattering of random pigment deposits below the actual hairline, to simulate the natural distribution of real hair.

A jagged hairline takes the concept a step further, by breaking up the hairline more aggressively to remove any linear aspect to its appearance. Hairlines like these can work exceptionally well for some clients, and ultimately achieve the same goal as a broken hairline. 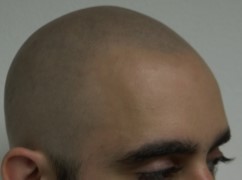 A lightweight hairline, sometimes referred to as ‘faded’ ‘feathered’ or ‘gradient’, is applied with an extremely light touch with no ‘line’ whatsoever, to completely remove any boundary to the hairline, thus avoiding unwanted attention. When executed correctly, lightweight hairlines push the boundaries of realism to new levels.

If a lightweight hairline is what you want, there are two important considerations that you must take into account:

Often combined with a defined hairline shape, an edge-up hairline is often referred to as a ‘hard line’ and involves no deviation from the intended hairline position. No pigments are scattered, and no attempt is made to break the hairline up.

These hairlines are still popular among younger clients, particularly African American and Asian clients, however a natural appearance is not usually achieved. The style is best suited to those who want a ‘statement’ look and aren’t concerned about being called out.

Also, a word of caution. Nothing but edge-up hairlines in a technician's portfolio is often a sign of limited experience, or a sub-standard skill level. Defined hairlines are simpler to create than ultra-realistic hairlines, and frankly, require less talent to produce. Don’t be put off at all if a technician has hairlines like these in their portfolio, but be mindful that they should be able to create a mix of hairlines, inc the latest broken, jagged & lightweight examples shown above.

Whatever you decide, here at Velvet Pigmentation Clinic, we work with you to discuss exactly what you want. Make sure to go through all of these options with your technician in order to come to be best choice of hairline for you. You can bring photographs of yourself and similar hairlines that you would like to adopt, and you may also see the photographs of past examples of work from your technician to use as a reference point. We are able to replicate any hairline you decide, whether a sharp look or a more natural design.

This article was originally written by Damien Porter of ScalpGuru.com. Edited by Eve Pleavin of Velvet Pigmentation Clinic.